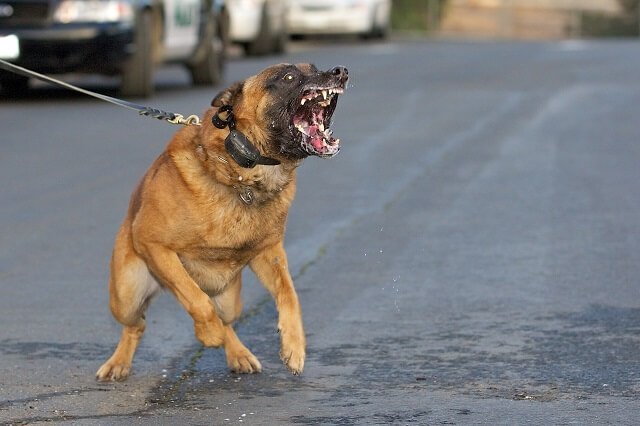 I remember the first time my dog bit someone. He had never done that before, and thankfully, never did again. He just lunged at a complete stranger and bit his calf. I don’t know what vibe he picked up from the person, but whatever it was almost led to a lawsuit. It left me wondering, “what causes dog/human aggression?”

When you have your sweet, innocent pup attack a person without agitation, that can be rather disappointing. But for it to become a habit is just heartbreaking. If for whatever reason, provoked or unprovoked your dog bites someone, it is your responsibility to do whatever you can to keep it from reoccurring, using acceptable techniques. While most dogs trained with positive reinforcement are able to completely recover from the habit, some training methods only suppress them, thus leaving their canine to become a ticking time-bomb.

Dogs are more bark than bite. It is a well-known fact that most animals would rather intimidate a threat into backing off than actually start a fight, even among the wildest of creatures. Dogs are the same. They would rather growl and step away from a threatening situation than actually bite. So when a dog actually takes that step to bite someone, it is important to understand why.

The leading factor in dog aggression is stress and anxiety. Another way to put this is pressure. When a dog feels under pressure, either physically or emotionally, it can snap. Stress and anxiety are built up when a dog lives in an uncomfortable environment. A dog living in poor quarters and constant discomfort is bound to be grouchy, just as we would if we were forced to live in a cardboard box or spend extended periods in our own filth. But discomfort goes beyond hygiene.

When a dog is deprived of basic things it needs to be emotionally balanced, that is another type of pressure that may cause dog/human Aggression. When a dog lacks enough exercise, its excess energy boils over. Lounging indoors all day, without adequate exposure to the outside world to run free and experience people is detrimental to your dog’s well-being.

The worst kind of pressure is intentional pain, either from abuse or so-called training. Dominance training and other confrontational training methods have been proven to cause dogs to be aggressive. While they don’t show this aggression towards their owner or so-called ‘Alphas’, they do not restrain themselves from attacking strangers if given the chance. Unfortunately, even family members often end up being victims too. Not to say that every dog trained this way is aggressive, but there is a high correlation between dogs trained with violence and aggression.

Wounded dogs don’t play games. When a dog is feeling ill or in some physical pain, it fears any situation or person that would make it worse. While in this state, anyone is a target, even you, their beloved owner, until the pain is resolved.

Genetics, on the other hand, is harder to determine and in some cases, control. A dog with a mental condition could be well trained and perfectly fine until the neurological imbalance kicks in. Yes, dogs can inherit neurological problems too, which are easy to misunderstand as simple aggression. Bear in mind that this has nothing to do with the breed, but the individual lineage of the canine. While some breeds are known to be aggressive, it has nothing to do with breed, but more about ownership.

When a dog is trained or conditioned to see people as threats and to defend their owner or property at all costs, they will attack people. The attacks are deliberate and tend to be more vicious than dogs lashing out of anger or fear. The preferred dogs are big breeds, which is why people assume certain breeds are more aggressive than others, forgetting that they did not have any choice. Many people like training Rottweilers as guard dogs, so many people don’t want them in their homes. However, Rottweiler’s are also effective search and rescue dogs, as they are loyal and courageous. If Labradors were trained to attack strangers, they would get a bad name as well.

[Related, check out these Dog Grooming Tips and Products]

How To Manage An Aggressive Dog

If a dog has bitten a person before, the first responsibility of the owner is to prevent it from happening again. Unless a dog has completely lost it, it won’t go around looking for people to bite. So, the owner’s duty is to make sure people don’t come to it, no matter their age.

Whenever you are having guests over, keep your dog in a locked room or safe zone. The most common victims of dog bites are children and the elderly. Children play rough with dogs and don’t have quick enough reflexes to move away when a dog is about to pounce. Children are also fond of running around and dogs like chasing moving objects.

It is advisable to also warn guests and tell them not to come too close to your dog, but also to try not to act fearful around it. Some people like to deny their dog’s tendencies, so they don’t warn strangers. This is reckless and irresponsible and it has led to too many ER cases. There is no shame in telling people to give your dog some distance, while you work on resolving the aggression.

[Related, check out the Best Dog Crates and Cages]

How Can I Resolve The Aggressive Behavior?

You don’t have to take your dog to a shelter or have it sent to ‘a farm’ because it bit one person. There are ways to deal with the problem and we will discuss them briefly here.

In most cases, once the root cause has been identified and dealt with, that attitude will stop. If your dog is redirecting its aggression because of the training method you have been using, a switch to positive reinforcement – which works on dogs of all ages – will make your dog happy and less stressed. The trauma might still be there for a while, so you would still need to be watchful of potentially stressful situations and get him out of it.

Getting your dog out of the house and into the park for much-needed exercise will do him a lot of good. Once that energy has been burnt off, the frustration, stress, and anxiety will be relieved and your dog may be able to continue normal human contact. Inadequate exercise causes many dog behavioral problems, so this change alone can correct several issues.

For dogs with medical problems, you have to get help from a vet. When my dog started acting crazy, we had to get a vet over because we knew it wasn’t normal. Once the disease was treated, he got back to normal and we celebrated with many, many treats! Don’t worry, we gave him something too.

Changing your dog’s living quarters is also quite beneficial. A friend of mine complained about her dog that had bitten a few people and they feared it was getting worse. As it turned out, the dog was sleeping on a cold floor in a custom-crate, and was confined to his crate all day! Who wouldn’t bite people in those conditions? Not only that but because of the confinement, he wasn’t getting enough exercise. Once we got him out of that cage and to the streets, his behavior changed remarkably. He still barks at strangers at the gate, but no more bites.

The most difficult bunch are dogs that have been trained to be vicious. Even though positive training can deal with a lot of the issues, they have probably learned how to be a certain way for years. This would require a qualified trainer’s help. You may also need to change the dog’s environment and any other factors that make it feel it is still needed as an offensive weapon. Spend time in open spaces, where it has no territory to defend.

To enable your dog to see guests as friends and not threats, employ the Halloween method. Hand out treats to your guests and have them feed your dog, from a distance when they come in. Your dog will get treats from everyone that visits, like a kid on Halloween. When your dog keeps getting spoilt by strangers, he will begin to expect good things from people. As he acclimatizes to this new way of life, the distance between them can be reduced. But don’t be in a hurry to move on to them feeding your dog directly. Baby steps.

Related, check out the Best Dog Beds and Houses

We don’t always know where our dogs come from, so it can be disheartening to get a puppy that is aggressive towards humans. The same applies when we adopt rescue dogs. They may be coming to us with severe trauma and trust issues which if we don’t perceive on time, could be problematic. It is therefore important to learn the tell-tale signs of how our dogs are feeling, so we know which situations are causing Dog/Human Aggression and how to deal with it effectively.

Rarely would you need to take the dog back. But you may need an extra set of hands from a certified positive reinforcement trainer. Training your dog in an atmosphere of love and fearlessness can transform any bad habit. Don’t throw the dog out. You can do it! And as always, don’t forget the treats whenever your dog passes the no biting test.

We hope that you found this piece on Dog/Human Aggression informative, check out our blog for more interesting reads.