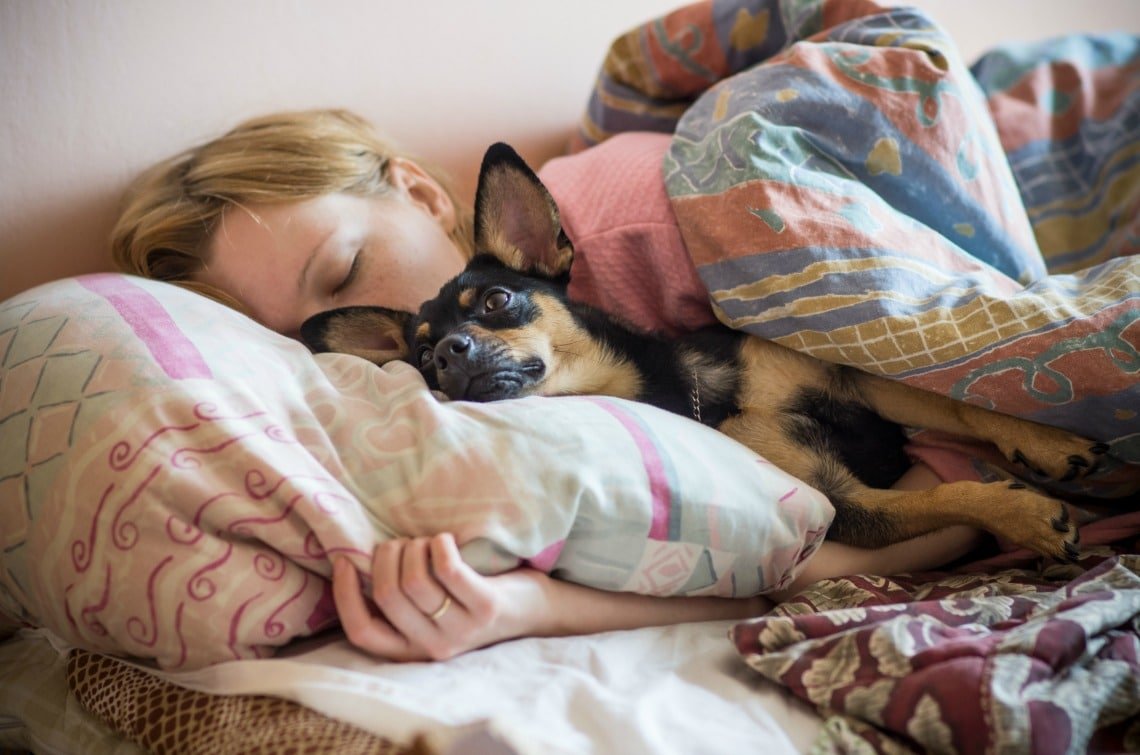 My Dog Sleeps Against Me

My dog sleeps against me or on top of me all the time, so if yours does the same, just know that you are not alone and that it’s normal. Many dog owners are accustomed to their dogs wanting to sleep touching them. It can be a bit frustrating especially if you’ve already bought him/her that comfy memory foam bed but still prefers sleeping against you. This causes many dog owners to go over the internet looking for answers and I guess you are one of them. You don’t have to worry though, I’ll let you in on some info about dogs that you previously didn’t know about and how to go about it.

In most cases, your dog is always eager to lay against you while you are sound asleep. What appears strange is “why does my dog sleep against me?” Is it normal for dogs to behave this way?” Well here are some of the reasons why dogs sleep against their owners;

1. To assert dominance over you

Every dog’s dream is to have a sense of belonging to a certain group or pack. In most groups or packs there is always a battle for dominance among members. This is seen, especially, out in the wild where different animals try consistently to emerge at the top. However, in your home, such aggressive behavior can be dangerous since you are the one who is supposed to be in charge due to the fact that you provide meals, security, and shelter. Nonetheless, this behavior can manifest once in a while as a test against your dominance.

It can slowly begin by defiance of some house rules such as stealing your food, persistence in leaping on you, running out of the house and most importantly laying against you. The good news is that dominant behaviors can be corrected by the use of obedience reinforcement techniques.

Moreover, if you see any aggressive behavior towards other people or pets while laying on you, then instructing it or giving a few timeouts can be a probable solution. In addition, dogs are social creatures, and it’s quite normal for them to crave attention from you. Therefore, withdrawing your attention can serve as enough punishment for them. If the behavior persists, you can seek out help from the vet. It may be some underlying condition which the vet might be able to address.

2. It can be a normal behavior in relation to its breed

It is quite normal for certain dog breeds, like the Great Danes, to pile up on each other. Since these dogs are town folks, they have no problem extending this behavior to humans. In this case, they have nothing to prove and it is far much more different from asserting dominance. Being the one in charge (the pack leader), you should be used to this. Laying against you or any other family member is just another way your dog interacts with people. You should do more research on the various dog breeds and their character traits before making a decision.

3. They invade your space because of loneliness

One common trait with most dogs is that, they always want to be part of the action, given that they are naturally social creatures. This can be seen especially during the weekends when you are on your bed watching Netflix and having some snacks, they may want to join you. It can also apply when you are going to sleep, they’ll still want to cuddle with you.

4. They want to spread their scent on your body

Most of the time when your dog lays against you, and especially when it places its tail on your body, it intends to rub its scent on you. The tail is an essential body part for dogs since they use it for communication. Many dog owners mistake the dog wagging its tail to be a sign of happiness, an assumption that is not necessarily true. Every dog has a unique scent which is usually from their anal glands. That’s why you’ll see most dogs sniffing each other from behind. Therefore, whenever you see a dog wagging its tail close to you, it wants to pass its scent to you. This way, the dog wishes to pass the message that you really matter to him/her.

In addition, most alphas usually have their tails up most of the time. They wave it sideways in an even manner to show that they have everything around them under control. However, most scared dogs usually hide their tails between their legs, and dogs without tails are usually careful with who they interact with.

Keeping in mind that dogs have a sense of smell 40 times greater than that of humans, your dog can still be able to detect your smell even after you’ve washed your beddings. Your dog might just want to lie against you because he/she loves your smell, even on your beddings.

Sleeping on the floor on a winter night can be unbearable for your dog. They will want to come to your bed due to the warm sheets and body heat. At the same time, they may also want to snuggle next to the person they love most.

If you are the kind that spoils your dog too much, then don’t be too surprised if you catch them sleeping in your master bedroom. Dogs that are pampered excessively tend to rebel against rules and will cross the line at your expense.

8. To play and cuddle with you

Your dog could just want to play with you, more so if they realize laying against you always results in playing and rolling over. However, this depends on the relationship you’ve built with your dog. What most dogs want is to spend some quality time with their owners, which involves playing or cuddling; nothing more than that. Going forward, you should keep in mind that whatever your dog does, for instance, laying against you should be on your own terms. If it gets out of hand you should consider enforcing some obedience training to keep them in check.

One thing you could do is immediately stand up whenever your dog jumps on you. They may be persistent on this but you have to always stick to your guns. Eventually, when they calm down, you can invite them over by saying the word “chest”.  After a while, you can give them the command “away” by directing them where they should go. If he/she complies with each command you’ve given, you can reward them with a tap or a treat. If your dog learns that your chest is a place of privilege and not a right, it will build a healthy relationship between the two of you.

At times it’s quite normal for pet owners to have a busy schedule. Therefore, your dog might want to show some affection for the little amount of time you spend with them. This can lead up to them jumping on you just to tell show you still matter to them.

Something that is rarely understood by most dog owners is that there is no better place your dog would lay on rather than your body. Given that dogs regard their owners to be part of their family, they seek to demonstrate this sense of belonging by giving security and comfort while receiving it back. Nothing else fulfills this desire than lying on you. Additionally, in an effort to protect what they never want to lose, dogs sleep next to their owners to offer protection even though there is no real threat.