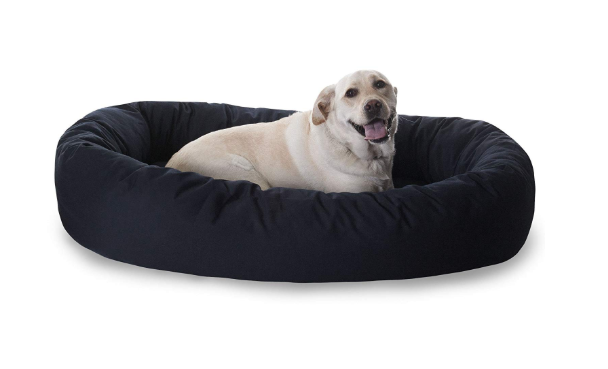 Why dogs bark in sleep

Dogs are rather complex animals and it takes a lot of time and attention to understand them. They don’t seem as complicated as they actually are because over the years, we’ve made tremendous efforts to understand them and we are a lot more familiar with them than we are with other animals.

Yet still, there some things our dogs do which leave us with more questions than answers because some of their behaviors are rather off and a little weird. One such scenario is a dog barking in sleep.

When you make a close observation, you’ll notice that your dog—though not always, makes some sudden movements and sounds while sleeping.  More so, barking and growling. This may make you think s/he is awake but when you take a closer look, you’ll observe that the dog is asleep to mean that the dog actually barked in its sleep.

For a new dog owner, you might find this a bit confusing. No need to worry though, almost every dog does this at some point and it won’t bother you anymore once you get to understand why it happens.

What makes dogs bark in their sleep?

Recent studies have proven that dogs dream in their sleep. Not all living creatures dream, but dogs are among the few that do. Tests undertaken by scientists prove that when dogs sleep, they develop similar brain waves (sleep patterns) as humans given that the exact same spots of the brain light up. This is the reason why dogs bark in sleep, just like humans they are able to react to the characters in their dreams. I guess you’ve heard of people who talk in their sleep—pretty much the same care here. So, the dog is essentially barking in reaction to something in its slumberland rather than to something you’d see or hear.

The reason why dogs dream

Why do dogs dream? No one has been able to come up with a specific reason as to why dogs dream. However, from a theoretical point of view; dogs dream to process old memories and sort out intense emotions. Nightmares can be a result of bad encounters and fears that your dog has experienced. Scientists conclude that these are some of the reasons why humans dream too but there is no absolute answer for sure.

What is out of the norm about my dog barking in sleep?

If your dog isn’t dreaming then it could be a seizure. The only way to know is to wake it up by calling its name softly. This is because a dog experiencing seizures can’t wake up until the seizure passes. The best way to deal with seizures is by visiting the vet for proper diagnosis and treatment.

Dog barking in sleep is normal in sleeping dogs. Therefore, there is no reason for alarm when this happens to your dog. If the sounds and movements sound rather suspicious; just wake him/her up to ensure safety. However, you should note that if your dog barking in sleep and experiencing some sort of emotional stress, it could be a nightmare and you should be careful while waking him up as it’d wake up and attack you out of confusion. Startled dogs can unintentionally get aggressive causing it to bite the hand that shook it.

(Click Here To Get Your Dog The Perfect Dog Bed)